{Excavation Of The Contemporary Nero In The Ruins That Birthed Him}

The present of Object Americana is as grim and foreboding as the past several years have been for all of us. Printed in red plastic and taking the form of a shattered architectural ruin, the object at first resembles nothing so much as a squat, rectangular play-house. The would-be mansion is large, imposing itself horizontally across a nonexistent landscape with two wings spreading on either side. There appears a human head in the middle of the house, taking up what would likely be the largest section in the center of the building. It faces forward and boasts a familiar toupee-like mess of swept-back hair, trademark look of the former boardroom dictator currently occupying the Oval Office [figure 1]. The head's right eye is recessed in a wall-like projection sweeping outward toward the adjacent wing of the building, complete with a similar floor-like projection from the cheekbone. The head's left eye is a gaping pit, dark to the daylight with a rectangular window admitting views into a twisted, empty room inside the cranium [figure 2]. On either side of the head, the two wings of the building are strikingly different. The left wing is house-like, with a triangular roof and rectangular window pits in its exterior side. The front has a rectangular projection that is nearly flat-roofed. The gap between this wing and the central head is prominent and resembles a jagged valley. On the other side, the right wing appears as a bombed-out husk of a building, seeming to project upward from the neck of the figure and with many fragmented sections. There is a central cavity in this side, as though several walls have been dismantled, and visible in this cavity where a room should be is only chaos: a collection of crystalline points and dangerous recesses [figure 3]. Behind this section, an intact part of the building appears to have a vertical column standing at its far corner, still holding its section of roof aloft. This wing of the building is impacted into the side of the head, inseparable and a part of it. The only exception to this phenomenon lies in the rear of the building, where a small crevasse is visible separating the column section from the back of the head.

To my mind, this object bears the weight of recent American history heavy on its slumping shoulders. The political system in this country has been in a state of collapse for the entire span of my life, close to thirty years at the time of this writing. The governmental state of affairs has grown more cartoonish and grotesque with an unrelenting, inverted sense of progress. I have observed with an increasing sense of panic and absurdity as my fellow Americans have moved to embrace ever-more-ignorant ways of seeing the world around us as well as each other. It is a personal belief of mine that one root cause of this bewildering progression has been the suburban places set out for us as the ultimate goal of the American lifestyle. Single-family houses in endless suburbs, serviced by single-family automobiles, single-family lawns, and single-family dogs. As the personal lives of Americans has shrunk to some weak parody of a Libertarian fantasy, the meanness, militarism, and outright avarice of our politics has followed suit. It is clear that President Donald Trump is not an aberration. 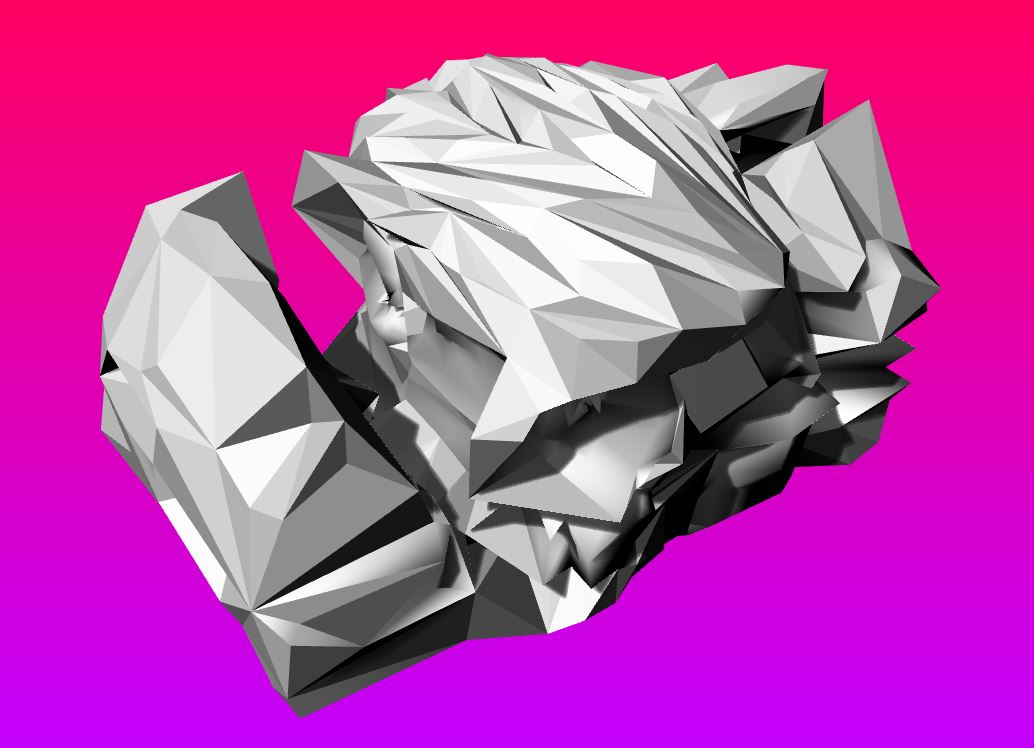 Top view of the final trump--mcmansion object. The American president's characteristic "toupee-like mess" clearly visible, along with something that resembles an ear. The left-hand wing of the mansion is also apparent, house-like and somewhat independent from the central mass.

The left eye of the president's visage has become a gaping portal to a twisted chamber inside his cranium. The master bedroom, gold toilet and all? 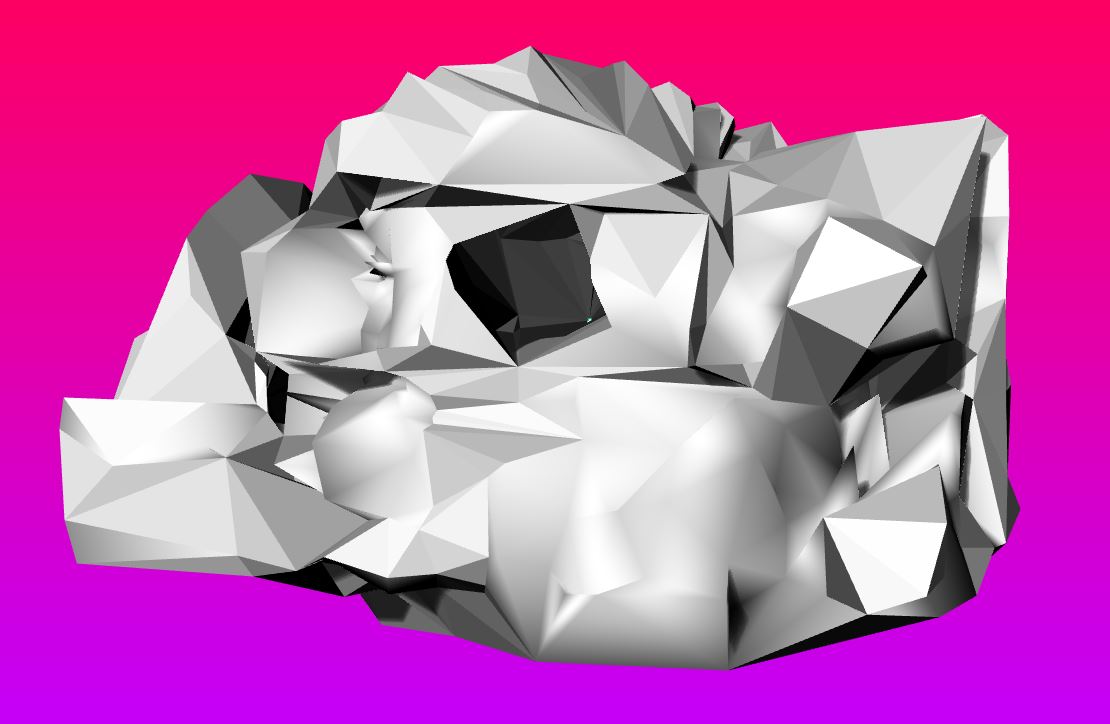 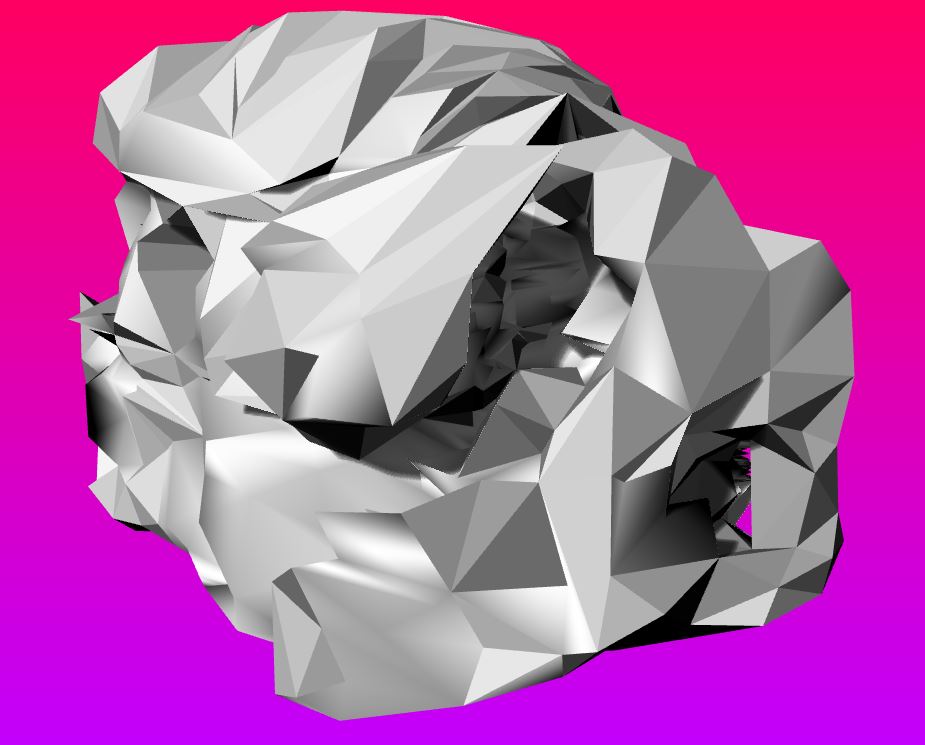 Fractured, detonated right wing of the mansion. Lone vertical column visible to the rear (right side of image). 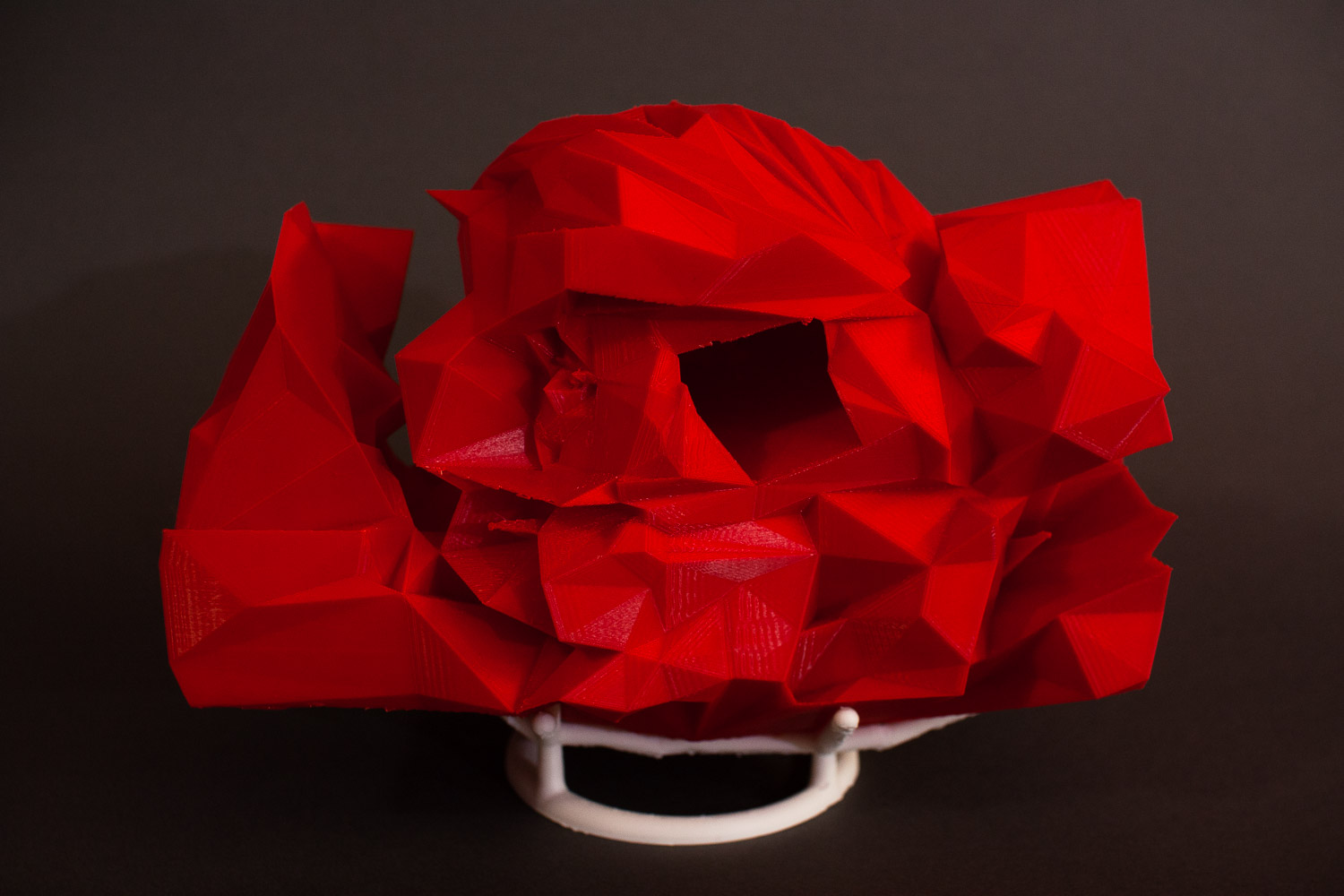 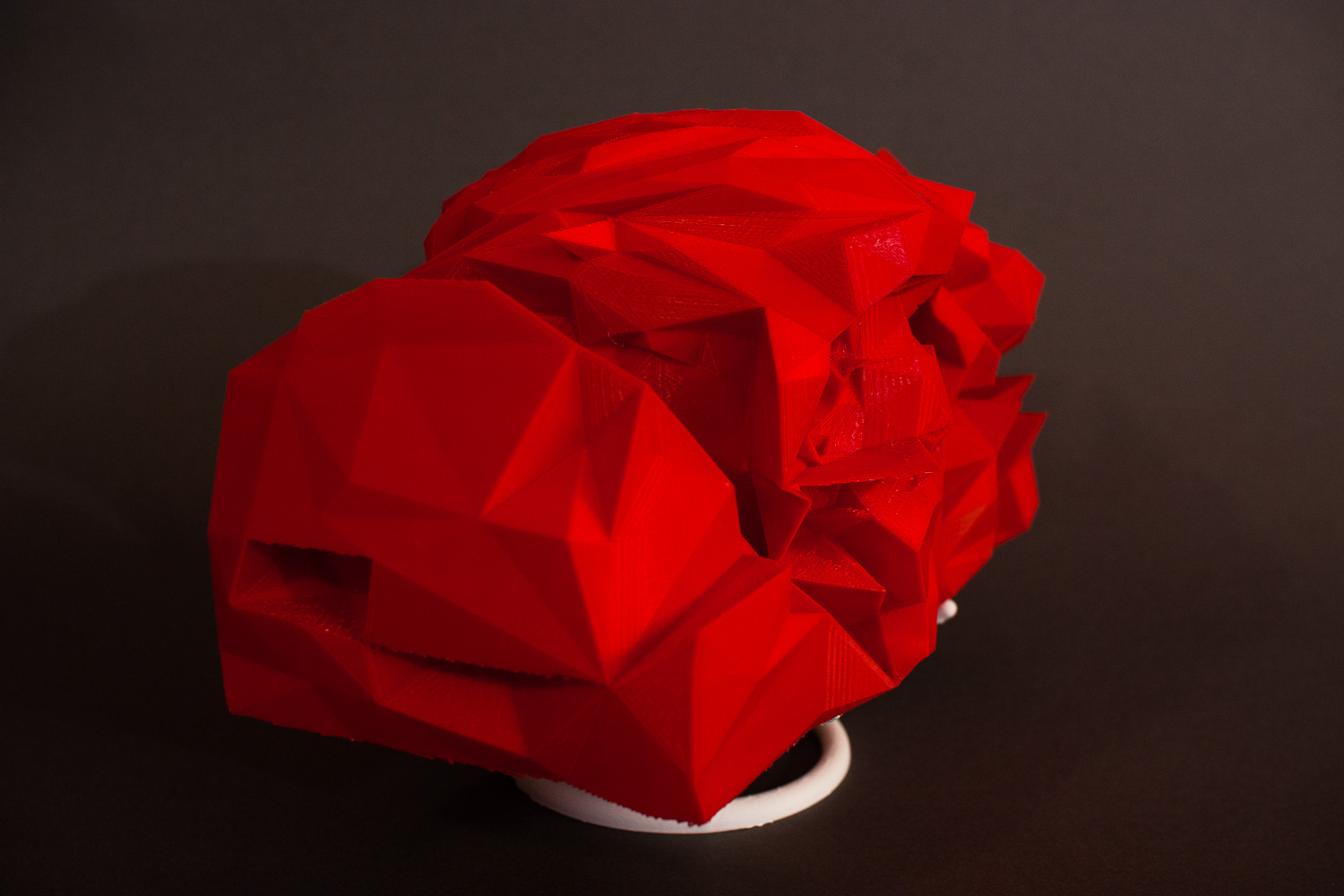 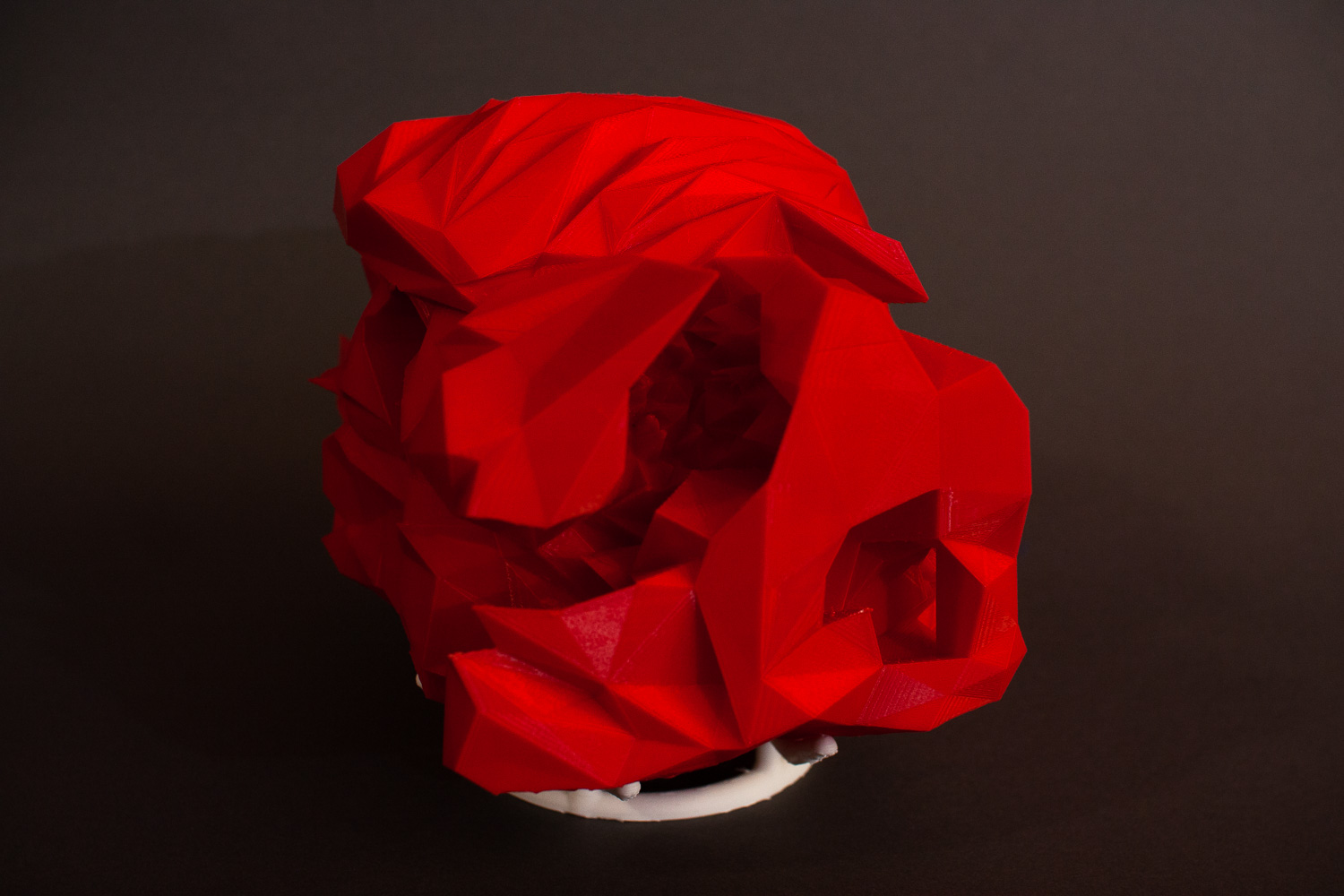 trump1--mcmansion-2e49{Excavation Of The Contemporary Nero In The Ruins That Birthed Him}, 2020.
3D print in red PLA with stand in white PLA. Unique thesis edition.